PACT Med — is it a fashion trend, or an efficient way to get rid of fungus?

The way of getting rid of fungus with the aid of light waves has been gaining more and more popularity over the last years. The PACT Med method of photodynamic treatment of onychomycosis was first presented by the German scientists from the Hahn Medical company in 2013, after 14-year-long cooperation with the microbiology department at the University of Tubingen.

The method of photodynamic antimicrobial therapy had proved its efficiency in practice over the years, so the mycologists of our clinic choose PACT Med to help their clients fight fungus. Let us have a look at how the method works, and how many sessions a patient has to take in order to recover completely.

How does PACT Med work?

The method is based on the difference between the structure of fungus cells and of healthy human cells. During a session, a special gel is applied on the affected site, which penetrates deep into the nail and makes the fungus cell membranes light-sensitive. When the affected site of the nail is exposed to light waves, the pigment contained in the gel breaks apart, and forms active oxygen that helps destroy the fungus cells.

A great advantage of the photodynamic treatment method is that it allows for acting on the fungus even in hard-to-reach places without any harm to the patient’s health. Due to the deep penetration of light waves when using the PACT Med emitter, the fungus is removed forever.

Why do the patients of our clinic choose PACT Med?

You must have heard the folk saying, “Fix one thing and break another”. Unfortunately this is the case with getting rid of fungus. In a classic treatment regimen, patients receive antimycotics (antifungal tablets), which have an adverse effect on the gastrointestinal tract, the liver, and the kidneys. Our patients choose PACT Med because they understand that for the present day it is practically the only possible safe way to get rid of fungus.

The method of photodynamic antimicrobial therapy:

Photos of nails before and after PACT Med sessions: 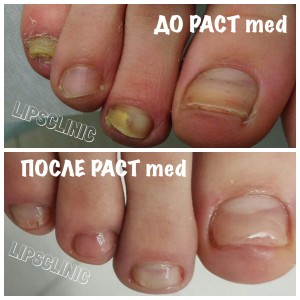 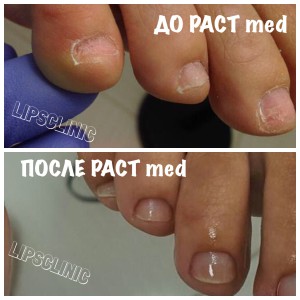 What do PACT Med sessions look like, and is any preliminary preparation required?

Procedures of antifungal therapy with the PACT emitter can be performed with any state of health. You needn’t do anything to get ready for the sessions. The required number of sessions on the PACT device is determined by the mycologist at our clinic after a scraping for fungi is collected and the diagnosis is established.

The sessions are performed by the clinic’s podologist. Altogether, the procedure looks like this: you come, the podologist grinds the nail surface, then applies a special gel, and exposes the affected area to light waves during 9-9.5 minutes. After the procedure, the doctor appoints the time of the next session. The podologist can recommend applying local antifungal agents for prophylaxis and protection of the nail plate between the sessions: lacquers, ointments, or creams.

How many PACT Med sessions do I have to take in order to recover completely?

The number of sessions depends on how advanced the disease is. If you have an incipient stage, and only a part of the nail plate is affected, you may need only three PACT Med sessions with intervals of 1-2 days.

In the future, you’ll have to watch the growth of the nail plate for several months, and if the fungus reappears, to take a procedure of photodynamic therapy again. In advanced cases, when the disease is making progress, it can take 6-12 months to get rid of the fungus. During this period you’ll have to visit the podologist and to undergo PACT procedures. And after the end of the course, to visit the mycologist once again for a follow-up test.

Do you want to know how many sessions you need to take in order to get rid of fungus?